Here is the trailer for the film that I worked on this year.  I have been busy sculpting heads, molding and animating with the skilled team down at the Animortal Studio in South Wales.  It is a privilege to have worked with a crew who are so respected in the field of stop motion and puppet making.

(None of the puppet/animation work in this teaser trailer is mine as I began work towards the end of production.  Once the film is released, I will post images detailing my involvement.)


An image of me at work in the puppet department at the Animortal Studio. 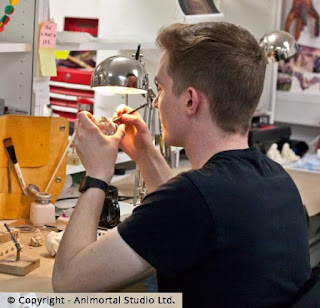 Originally from down under, Gus has professional experience as a sculptor, model maker, animator, illustrator and performing artist. He is a recent graduate of the "Stop-motion Animation and Puppet Making" (1st) course at Staffordshire University.
He has previously received a Level 3 National Diploma in Creative Media Production (D*DD) and an HNC in Performing Arts (D) at the City of Liverpool College.
He is currently seeking work placements so bring him on today!